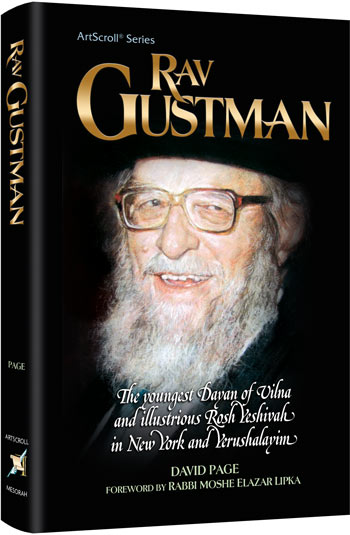 The brilliant yeshiva student. The youngest dayan on Vilna's beis din -- and its sole survivor. The partisan fighting Nazis with guns -- and with his bare hands. The eminent Rosh Yeshivah, beloved by his students -- and by many of the twentieth century's greatest gedolim. That was Rav Gustman zt"l. And this is his unique and inspiring story.

When little Yisrael Zeev Gustman's father brought him to his rebbie, the Chafetz Chaim, the venerable sage called him a "good boy." This "good boy" knew all six sedarim of Mishnah by heart by the time he was ten. Years later, when he was a famed Rosh Yeshivah, he insisted that he'd never been an iluy, a child prodigy; all his youthful accomplishments, he declared, came through his intense love of Torah.

It was a love that would mark him throughout his long, unusual, and productive life.

At the age of 21, Rav Gustman was the youngest dayan to sit on the famed Vilna Beis Din. Even before that, his brilliance and diligence brought him into close relationships with many of Lithuania's most revered gedolim: Rav Shimon Shkop, Rav Chaim Ozer Grodzinski, Rav Chaim Shmuelevitz, and the Chazon Ish, among others.

When the horrors of war came to Vilna, Rav Gustman was saved from certain death by the prophetic words of Rav Chaim Ozer and by a deathbed berachah from Rav Chaim Ozer that he would survive. Rav Gustman's war experiences were nothing short of miraculous. He survived being shot in the head at point blank range. He hid for six months in a pit with his family, living on scraps thrown in by a non-Jewish farmer - and during that time he learned Meseches Zevachim from memory twenty times. As a partisan, he fought the Nazi soldiers in the forests of his occupied country.

With war's end, Rav Gustman helped rebuild Torah learning, first in Vilna, then in New York, and, finally, in Eretz Yisrael. His yeshivah became a legendary place of learning for anyone who wanted to plumb the wisdom of Hashem's Torah, be they talmidei chachamim, young yeshivah students, or Supreme Court judges and Nobel Prize laureates. If you wanted to learn, if you were willing to put in the deep effort that the Rosh Yeshivah demanded, if you loved every word of Torah, as he did Â—you were welcome to Yeshivas Netzach Yisrael. Rav Gustman: The youngest Dayan of Vilna and illustrious Rosh Yeshivah in New York and Yerushalayim paints a personal and warm picture of a unique figure in the Torah world.