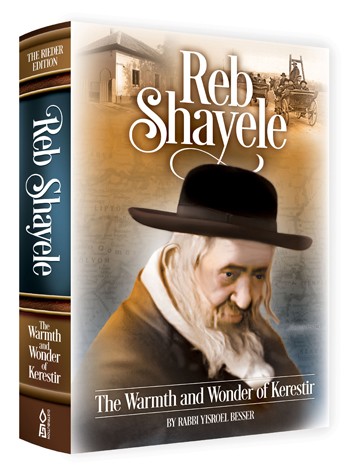 Reb Shayale of Kerestir. More than a name, it was a guarantee, a promise, an invitation  HE WAS A TZADDIK to which Yidden were drawn with invisible cords of love and hope, where the unsolvable problems were resolved, where the incurably ill found healing, where souls numb with cold felt warmth. Fiery Chassidim found truth, and hungry travelers found nourishment. The Rebbe - who labored in Torah, poured out his heart in prayer, and seemed to exist in a realm of his own between heaven and earth - would stop everything if a Jew needed a cold drink or warm bed, would cease his holy toil to help another. He belonged to the people, and they to him. A generation loved and revered the tzaddik of Kerestir, and they transmitted this veneration to their children, who in turn passed it down to their children.  Today, more than ninety years after the passing of Reb Shayele, his stories, image, and teachings still serve as a source of blessing and healing to multitudes. Thousands converge on his burial place each year on his yahrtzeit, and those connecting with his ideals and message feel the force of his merit accompanying them. The Hebrew-language volume, Moifes HaDor, was a novelty: pulsating with emunas tzaddikim, well researched and precise as an academic journal.  Within months of its release, a new printing was needed, and then another. The Yiddish language version best-seller was greeted with similar enthusiasm, sold-out in record time to a readership eager to hear about the tzaddik, to own a book which is itself a source of blessing.  This is the first English-language work to tell the story: like the town itself, you will not leave the same as you arrived. You will be ushered into the peaceful town on the banks of the Bodrog River, moved by tales of hospitality and kindness, awed by the extraordinary that was ordinary in Kerestir - and just as then - blessed by a connection to this tzaddik.