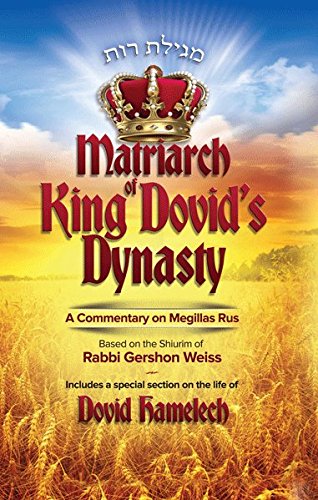 The bestselling author who explained and illuminated some of the most cryptic topics in Tanach - now provides us with a guide to an event we read about every year, yet is misunderstood and misinterpreted by so many.

Megillas Rus - read in shul on Shavuos, the yahrzeit of her descendant, Dovid Hamelech. Who was this righteous convert, and how did she merit becoming the wife of the Shofet Yisroel and the matriarch of the Davidic dynasty, culminating in Melech HaMoshiach? What motivated this Moavite princess to marry a Jew, and to follow her mother-in-law to Eretz Yisroel? How do we understand the plan arranged by her mother-in-law, which seemed doomed to fail from the start? What lessons can we gain from her life and legacy?

For decades, students and educators alike have turned to Rabbi Gershon Weiss' works in an effort to understand the story of Shimshon, as well as other episodes in Tanach and Jewish history, including the Holocaust. In Matriarch of King Dovid's Dynasty, Rabbi Weiss, esteemed rav, prolific writer, as well as Menahel Ruchani of Staten Island Yeshivah takes us through the entirety of the Megillah, with an extensive, enlightening commentary. Drawing upon numerous meforshim, the book provides readers with the means to emerge from this enigmatic part of Tanach with a lucid understanding of the events and their significance.

In addition to his exhaustive work on the story of Rus, in this book Rabbi Weiss also focuses on her great-grandson Dovid Hamelech and the challenges he faced throughout his life, drawing a parallel between his unique strengths and those of his forebear, Rus.

Matriarch of King Dovid's Dynasty is a critical tool, a must-have, for all those wishing to gain a thorough understanding of the Megillah and its significance.Based on Shiurim by Rav Gershon WeissAdapted and compiled by Rabbi Eliezer Delman and Rabbi Rafael Lachman