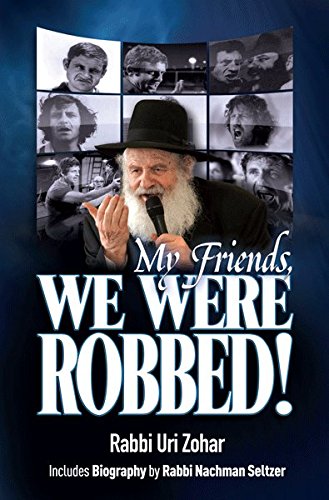 My Friends We Were Robbed!

In the late 1970s, an Israeli named Uri Zohar quietly made a decision to become Torah observant. When the news of that decision became public knowledge, it plunged a good portion of Israeli society, frum and non-frum alike, into total shock. You see, Uri Zohar was, at the time, the top comedian, television and radio talk show host, social satirist, actor, and film producer on the Israeli scene. Even more, he was the epitome of modern, non-Torah-observant Israeli society. How does such an individual simply jump ship one day?! Today, Rav Uri Zohar is one of our gedolim, a tremendous talmid chacham who is also involved in bringing others closer to Torah. This book contains the story of his decision to become a frum Jew, as well as his observations, thoughts, views, and descriptions of various facets of his journey's starting point, the world of the West. Is there a G-d Who gave the Torah to the Nation of Israel at Mt. Sinai, and if there is, what does He want from us? That is the question which Uri Zohar, at the height of his wildly successful career, set out to answer, and it is that intellectual excursion which is the subject of this book. Read the fascinating "teshuvah story" of Uri Zohar, as told to beloved author Nachman Seltzer. Join him on his journey of logic and reason, as related in Rav Zohar's own words, and discover-as he did-the deep, irrefutable truths of your very own heritage.