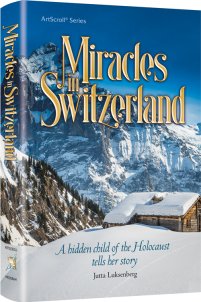 War and Holocaust were raging all around her, but this Jewish child, surrounded by the breathtaking beauty of the Swiss Alps, was safe. Or was she?

Miracles in Switzerland shares the riveting and largely unknown story of Jewish children - and, particularly, of one remarkable Jewish girl - who survived the Holocaust years in sanatoriums in Switzerland.

Little Jutta Zehner came from a respected, Torah-observant home in Poland. One-year-old Jutta suffered from tuberculosis, and her family was forced to make a terrible choice: send her for a long stay in a Christian sanitarium in Switzerland, her only hope of a cure, or watch her be crippled and perhaps even die of the dread disease. It was a choice that was no choice: Jutta, accompanied by her loving mother, went to Switzerland.

For several years Jutta's mother divided her time between Jutta and the rest of her family, until that dark day when war broke out and the Nazis invaded Poland - and from Jutta's family there was just silence.

Miracles in Switzerland is the story of Jutta, and many more Jewish children hidden away in a tiny Swiss village. And it is the story of incredible, unmatched chesed by Jews determined not to let these hidden children be lost to their eternal heritage.